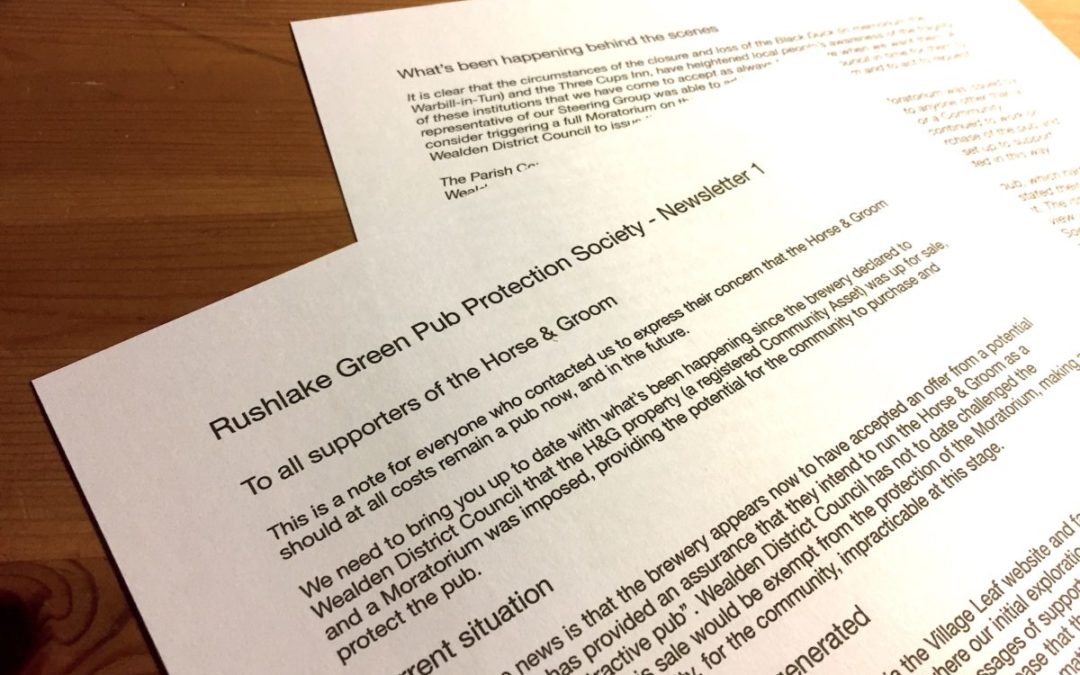 As you may be aware the Pub Protection Society emerged following a deluge of concern when it was announced that the Horse & Groom was being sold by the Brewery. With the impact of the Black Duck closure still reverberating around the community, many were urgently seeking an assurance that the same fate would not befall the H&G. So the Rushlake Green Pub Protection Society was formed to investigate whether the pub ( which the Parish Council had registered as a ‘Community Asset’ ) would be better protected if the community were to purchase the pub (now or in the future) for the community. In the end it turned out that the pub had already accepted an offer from a local buyer, and was also asserting that the sale would be exempt from the moratorium – that had been placed on the sale by Wealden District Council. The sale of the Horse & Groom appears now to have been confirmed, and we wish the new owners well in their new venture. But there are still many un-answered questions surrounding seemingly ambiguous protection (or lack of it) afforded by ‘Community Asset’ status, and we will report back on that when more is known

As explained elsewhere on the Leaf, the Rushlake Green Pub Protection Society wants to hear from you about how you value having a pub, what you feel about its future, and how it can best protected. So please respond to their Have Your Say survey.
Here’s the link to the survey: https://www.surveymonkey.co.uk/r/97KJPX8

Reproduced below is a fuller explanation of the Community Asset story, in the form of a newsletter which the RGPPS sent out to the sixty or so people who have already written in with support for the efforts to protect the pub.

To all supporters of the Horse & Groom
This is a note for everyone who contacted us to express their concern that the Horse & Groom should at all costs remain a pub now, and in the future.
We need to bring you up to date with what’s been happening since the brewery declared to Wealden District Council that the H&G property (a registered Community Asset) was up for sale, and a Moratorium was imposed, providing the potential for the community to purchase and protect the pub.

Current situation
The headline news is that the brewery appears now to have accepted an offer from a potential purchaser who has provided an assurance that they intend to run the Horse & Groom as a “successful and attractive pub”. Wealden District Council has not to date challenged the brewery’s claim that this sale would be exempt from the protection of the Moratorium, making any purchase by the community, for the community, impracticable at this stage.

The level of local concern generated
More than 80 people contacted us, many via the Village Leaf website and facebook where the announcement of the sell-off was shared and where our initial exploration of the community purchase to protect the pub was reported. And messages of support for our efforts continue to flood in. So there is no doubting the huge sense of unease that the sale of the Horse & Groom is generating. And that concern is fully justified because, no matter how good a purchaser’s intentions, any ownership that is purely commercial could end with an attempted change of use to residential. The fate of the Three Cups and very recently the Black Duck are chilling proof that no pub is safe, no matter how well-intentioned the owners at the start.

We have created a support network for the Horse & Groom
Whilst many questions remain about the current situation, we feel that whatever the outcome there is a vital role for the group (loosely titled the ‘Rushlake Green Pub Protection Society’) that has coalesced to support and protect the Horse & Groom. Even if the short term opportunities to pursue a community purchase many be open to question, we remain determined to keep up the momentum of support that has been created. If this sale of the Horse & Groom is allowed to go through we should explore opportunities to energise and promote the incumbent team, and the new owners, as they work to bring the Horse & Groom back to its previous levels of popularity and commercial success. Because the best way to keep the pub as a pub is to keep it busy, as a pub. In the longer term, we need to remain vigilant and ready to act as a community.

Gathering your ideas and views
We have begun work on a short survey, to allow everyone who has expressed support to have their say, and give us their ideas about what we need to do in the short and long term to ensure that Rushlake Green’s ancient inn remains in its rightful place at the centre of community life.

We will get back in touch soon to share our survey with you. In the meantime, here is the full story of how things have unfolded since the sale of the Horse & Groom was first announced . . .

It is clear that the circumstances of the closure and loss of the Black Duck (in memorium the Warbill-in-Tun) and the Three Cups Inn, have heightened local people’s awareness of the fragility of these institutions that we have come to accept as always being there when we want them. A representative of our Steering Group was able to address the Parish Council in time for them to consider triggering a full Moratorium on the sale of the Horse and Groom and to act to request Wealden District Council to issue that.

The Parish Councillors were unanimous in their support for this and the Moratorium was issued by Wealden on 23rd April 2021. This should have delayed the sale of the pub to anyone other than a community group gaining official status as a Community Interest Company or a Community Benefit Society, until at least 12th September 2021. So our Steering Group continued to work on developing a questionnaire giving further details of plans for a community purchase of the pub and seeking pledges of financial support. We were also being advised by a charity set up to support such ventures, which has helped 150 pubs around the country to be safeguarded in this way.

It then became apparent that two local businessmen had made an offer for the pub, which had been accepted by the brewery. When we met with them, the prospective buyers stated their intention to run it as a successful and attractive pub under a tenant’s management. The issue between us was how to guarantee the pub’s long term survival for the village. Our view was that this would more securely come about through ownership by a Community Benefit Society which would buy it through donations, shares and possibly money contributed by the government through the Community Ownership Fund. We would still appoint a tenant as they would. We were unable to agree a joint way forward. It appears that the purchasers intend to go it alone

The current position is that the brewery’s Chief Executive has stated that they could not support a local community proposal as they had accepted an offer from another party, that the pub had an incumbent licensee with a lease and who it was expected would continue trading. Their prospective purchasers would support the pub in the future and as such this was a transfer (sale) of a going concern and thus exempt from the Moratorium. Enquiries from Wealden indicate they are not standing in the way of this.

The Chairman of the Parish Council, Andy Long, will be seeking clarification on this point. Indeed the Parish Council at their last meeting undertook to request Wealden to give a clear account of their communications with Shepherd Neame and confirm the legality of this exemption.

This is the current position and should it become clear that the community could still proceed with a plan to acquire the pub, we will issue a further update. We have been in contact with Huw Merriman, our local MP, who you should know is very supportive of the steps we have taken.

Keeping in touch
If you’d like more details or have any questions, please email RGPubProtectionSoc@gmail.com We will shortly be sending all our supporters a link to a survey, so that everyone can have their say about the importance of the village pub and how we can protect its continued existence.