Osborne House was built on the site of the old Village School at the south end of Rushlake Green.

The late Mrs Jean Osborne recorded the history of Osborne House as follows:
When it was confirmed that the village school at Rushlake Green was to be closed Mr A Collins, ‘Johnnie’ to the villagers, suggested to Mr Osborne that the site would be ideal for some flats for the local elderly people to live – with all ‘mod cons’, which so many had never had. Mr Osborne talked it over with Mrs H Dunn and a committee was formed, which met at Stone House. Mr D Clarke a local architect was consulted as to whether a new building would be a better proposition than trying to make flats in the school building as it existed. The Chichester Diocesan Board was approached for permission to get the scheme going, as the site was owned by the Diocese. The then Hailsham Rural District Council and the National Federation of Housing were consulted as this was the first scheme to be developed in East Sussex. Advice was taken about how the tenants could be helped to pay the rents as the scheme was to be registered as a Charity which would be self supporting.

Nearly five years later a new building was started on the cleared site in 1965. Johnnie laid the first foundation stone. In June 1966 six tenants moved into the six single flats and five married couples and two sisters moved into the six double flats. The Victoria Diamond Jubilee Clock which had been bought by public subscription and put in the school building was carefully removed, conditioned and the face painted blue and then put in the front of the building for all to see.

It is more than 50 years since ‘Johnnie’ Collins came up with the idea of comfortable flats for local elderly people. Today Osborne House is administered by a voluntary Committee under the name of the Warbleton Housing Association (WHA) Ltd and is a registered charity. No salaries are paid to committee members which means rents are kept at reasonable levels. We are indebted to those who have gone before and whose foresight and caring nature brought about Osborne House so many years ago – a legacy that we value highly.

In July 2019, WHA purchased the freehold from the Diocese thus ensuring the long term future of Osborne House.
In February 2020, a project to refurbish the community room has been completed.
2020 also sees the start of fund-raising for a re-design and renovation of the Osborne House garden.

In February 2020, Warbleton Housing Association completed a refurbishment project to upgrade the community room. Osborne House was originally built with the community room lacking a direct internal link to the 12 residents flats, with access only via a separate external door. The refurbishment provides for a new internal door opening from the residents entrance hall directly into the community room. This makes the community room more inclusive for the residents use. A new larger kitchen has also been installed, replacing the old kitchen which was squeezed into a 3 foot wide passageway. The new design and layout provides a very open plan feel and also includes a built-in workstation for the housekeeper. A refreshed decorative scheme for the community room – with new carpeting, furniture and internet connection – further compliments the new kitchen for the enjoyment of the residents and their visitors.
See also a Village Leaf blog entry: https://rushlakegreenvillage.co.uk/works-start-at-osborne-house/ 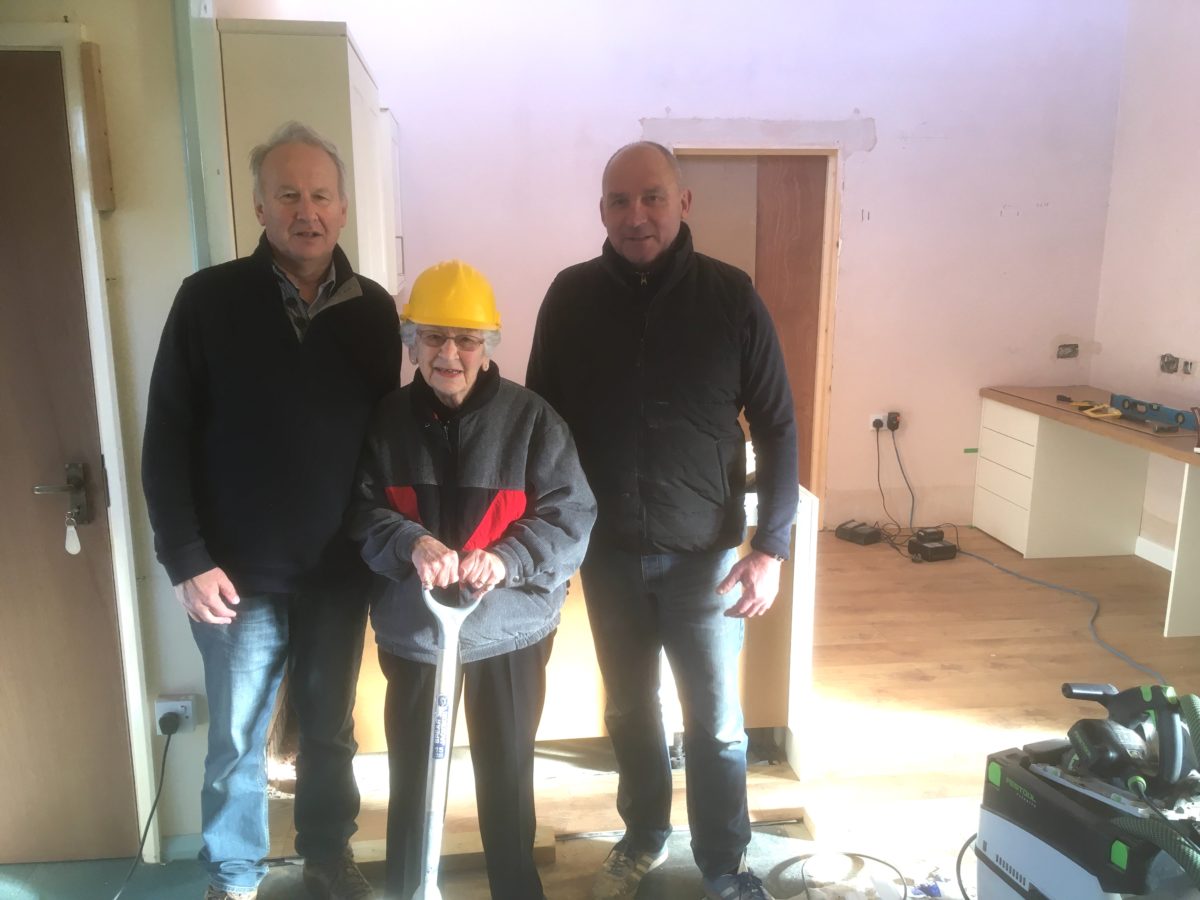 As part of the plans to improve the facilities for residents and their guests, the committee felt that the Osborne House garden offered a huge untapped potential. Which is why a project has been set up to involve the local community to help provide an inviting and accessible open space. The aim is to create a lovely space for our residents to enjoy, both sitting in the garden and looking out on the landscape.  The plan includes pathways leading to seating areas, a pergola for shade and plantings to provide colour fragrance and attract birds and insects.  Input received from residents has been taken into account and they will be involved with planting choices. Fund-raising for the Garden project was launched with a wine tasting evening provided by Cuculo Delicatessen of Heathfield on Saturday 8th February 2020 at the Dunn Village Hall. See also a Village Leaf blog entry: https://rushlakegreenvillage.co.uk/garden-project-uncorked/  Other fund-raising activities are currently being planned at time of writing. Anyone wishing to make a direct donation to the garden project should contact Clyde Young, WHA management committee Treasurer, at (clydeyoung@btinternet.com).